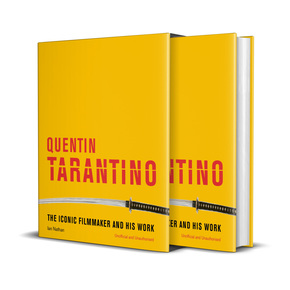 The iconic filmmaker and his work

A true cinephile, Tarantino is famed for his visually arresting approach and this exploration of his career will feature stunning images taken on set and behind the scenes.

Get an intimate look at the cult filmmaker of our generation. Packaged in a handsome slipcase and loaded with stunning pictures from the Kobal archives, this biography explores the genesis of Tarantino\'s unique directorial style and provides insight into his inspirations and his frequent collaborations with favoured actors. An 8-page foldout timeline presents Tarantino\'s entire filmography in the heart of the book.

Through in-depth and informative text written by renowned film journalist Ian Nathan, this book examines the entirety of Tarantino\'s work , including his early writing on screenplays such as True Romance and Natural Born Killers , his break-out directorial debut Reservoir Dogs and the career-defining Pulp Fiction , as well as his later iconic films, such as Kill Bill Volumes 1 and 2 , Inglourious Basterds and Django Unchained . You\'ll also go behind the scenes of Tarantino\'s latest epic, Once Upon a Time in Hollywood . As you make your way through Tarantino\'s incredible career, discover what inspired him, his working methods and the breadth of his talent.

With a visually arresting design that mimics Tarantino\'s approach to film-making and chapters organized by film, the pages are brimming with images taken on set and behind the scenes .

This is the ultimate celebration for any Tarantino fan.

\'I made this movie for myself, and everyone\'s invited.\' 28
Reservoir Dogs

\'I think of them as like old girlfriends...\' 44
True Romance, Natural Born Killers and From Dusk Till Dawn

\'Life is cheap. Life is dirt. Life is a buffalo nickel.\' 142
Django Unchained

\'I really was creating a little Agatha Christie thing.\' 156
The Hateful Eight and Once Upon a Time in Hollywood

"Smith has worked to craft something that will be perfect for film buffs of every genre who want to grow their knowledge of the world of film." The Nerdy Girl Express 20190913