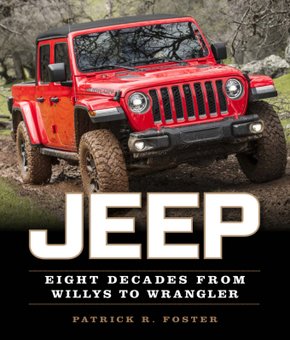 Eight Decades from Willys to Wrangler

Something New Under the Sun

In Jeep: Eight Decades from Willys to Wrangler , Patrick R. Foster chronicles in words and photos vehicle design and production from the beginning of World War II to the latest 2020 models.

The definitive, fully illustrated celebration of an auto manufacturer that paved its own way by going off-road is now updated to celebrate Jeep's 80th anniversary.

Few American vehicles, or vehicles made anywhere else in the world for that matter, are as universally iconic as the Jeep. From olive drab WWII military relics to the beloved Wrangler with its rear-mounted spare tire, open-air design, and telltale roll cage, the Jeep is a true classic.

In Jeep: Eight Decades from Willys to Wrangler, automotive writer Patrick R. Foster chronicles Jeep vehicle design and production from the beginning of World War II to present. Beginning with the Jeep as a crucial component of the American war fleet, Foster expertly recounts the corporate shifts, financial struggles and successes, close calls, and, above all, the enduring machines that have carried Jeep from the early 1940s to its triumphant role as a modern-day embodiment of American perseverance.

More than 200 co lor and black-and-white historical photos and period advertisements complement his expertly written narrative of Jeep's entire history, now updated to include five years of new model editions and prototypes, its return to the pickup market, and recent stunning marketplace successes. The resulting book reminds us that sometimes the road less traveled was just waiting for the right truck.