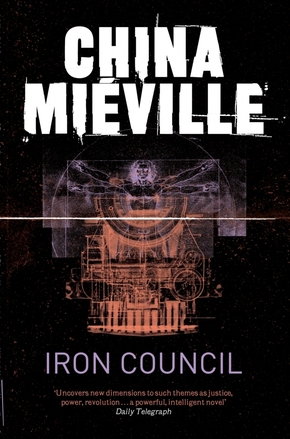 Rebellion and war race to take control of New Crobuzon in the award-winning Iron Council by China Miéville.

It is a time of revolts and revolutions, conflict and intrigue. New Crobuzon is being ripped apart from without and within. War with the shadowy city-state of Tesh and rioting on the streets at home are pushing the teeming metropolis to the brink. In the midst of this turmoil, a mysterious masked figure spurs strange rebellion, while treachery and violence incubate in unexpected places.

In desperation, a small group of renegades escapes from the city and crosses strange and alien continents in the search for a lost hope, an undying legend.

In the blood and violence of New Crobuzon\'s most dangerous hour, there are whispers. It is the time of the Iron Council.

Miéville, ChinaPar. China Miéville lives and works in London. He is three-time winner of the prestigious Arthur C. Clarke Award and has also won the British Fantasy Award twice. The City & The City, an existential thriller, was published to dazzling critical acclaim and drew comparison with the works of Kafka and Orwell and Philip K. Dick. His novel Embassytown was a first and widely praised foray into science fiction.