The Civic Foundations of Fascism in Europe 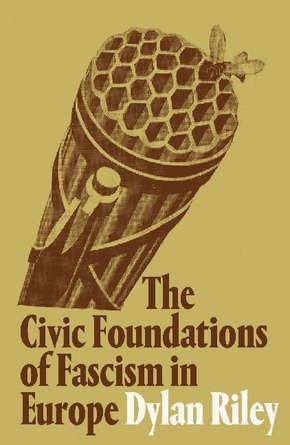 A historical look at the emergence of fascism in Europe

Drawing on a Gramscian theoretical perspective and development a systematic comparative approach, The Civic Foundations of Fascism in Europe: Italy, Spain and Romania 1870-1945 challenges the received Tocquevillian consensus on authoritarianism by arguing that fascist regimes, just like mass democracies, depended on well-organized, rather than weak and atomized, civil societies. In making this argument the book focuses on three crucial cases of inter-war authoritarianism: Italy, Spain and Romania, selected because they are all counter-intuitive from the perspective of established explanations, while usefully demonstrating the range of fascist outcomes in interwar Europe. Civic Foundations argues that, in all three cases, fascism emerged because the rapid development of voluntary associations combined with weakly developed political parties among the dominant class thus creating a crisis of hegemony. Riley then traces the specific form that this crisis took depending on the form of civil society development (autonomous- as in Italy, elite dominated as in Spain, or state dominated as in Romania) in the nineteenth century.

"This brilliant comparative study of the rise of fascism in Italy, Spain, and Romania brings Tocqueville and Gramsci into a novel and surprising conversation. It will change the way you think about civil society, fascism, and democracy."
-William Sewell, University of Chicago

"Make no mistake, this is much more than comparative fascisms. Dylan Riley not only rethinks and meshes the legacies of Tocqueville, Arendt and Gramsci; he sobers us up to the actual history of civil society and democratisation in continental Europe. This theoretical lesson seems still gravely relevant elsewhere in the world today."
-Georgi M. Derluguian, author of Bourdieu's Secret Admirer in the Caucasus: A World-System Biography

"Dylan Riley's intelligent study succeeds in opening fresh perspectives. His book ought to be read by everyone interested in fascism."
-Robert O. Paxton, New Left Review

"Riley's account of the civic foundations of fascism succeeds not only in throwing new light on old questions, but also in redefining the theoretical parameters for understanding fascism. It will change the way we think about fascism in the future."
-Max Whyte, American Journal of Sociology