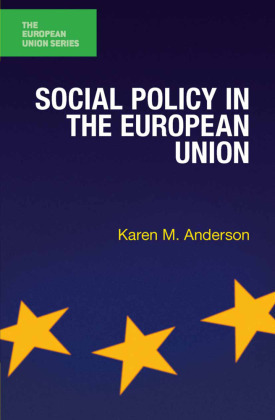 A sophisticated and accessible introduction to European Union social policy which takes full account of its relationship to the social policies of member states. It combines broad-ranging coverage of policy areas with a clear assessment of the policy process and of relevant theories.

Social policy has become an increasingly prominent component of the European Union's policy-making responsibilities. Today, for example, a highly developed body of law regulates equal treatment in social security and co-ordinates national security schemes; national health services have opened up to patients and service providers from other states; and rules govern the translation of educational and vocational certificates across member states. This state of affairs is all the more remarkable given the relatively limited resources at the EU's disposal and the initial intentions of its founders.

During negotiations for the Treaty of Rome in the 1950s, social policy was viewed as the exclusive provenance of the member states. There were to be provisions to facilitate labour mobility within the common market, but until the 1970s social policy making at the EU-level was modest. However, plans for the internal market moved social policy on the EU's decision-making agenda. The Social Chapter was adopted in 1989, and the Single European Act expanded EU competencies in social policy. The Treaties of Maastricht, Amsterdam and Nice all expanded competencies further, so that by the time the heads of government met in Lisbon in 2007 to sign the EU's latest treaty, the extent of supranational control over important aspects of social policy making was quite impressive.

This important book provides a full account of the evolution of social policy in the EU and of its current reach. It examines the reasons for the increased role of the EU in the area, in spite of formidable obstacles, and details its effects in member states, where social provision is often the biggest item in government budgets and a crucial issue in national elections. Drawing on research done on welfare states around the world and on European integration, this book provides a distinctive and sophisticated account of social policy in Europe, showing how it must now be understood in the context of multi-level governance in which EU institutions play a pivotal role.