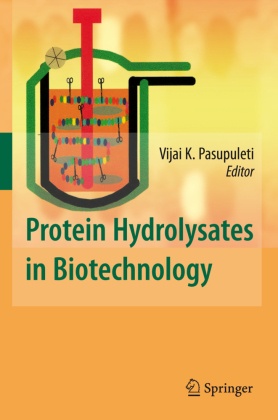 This book offers information on the latest techniques used in manufacturing, characterization and screening of protein hydrolysates, and their applications in a wide variety of industries in biotechnology.

Protein hydrolysates, otherwise commonly known as peptones or peptides, are used in a wide variety of products in fermentation and biotechnology industries. The term "peptone" was first introduced in 1880 by Nagelli for growing bacterial cultures. However, later it was discovered that peptones derived from the partial digestion of proteins would furnish organic nitrogen in readily available form. Ever since, p- tones, which are commonly known as protein hydrolysates, have been used not only for growth of microbial cultures, but also as nitrogen source in commercial fermen- tions using animal cells and recombinant microorganisms for the production of value added products such as therapeutic proteins, hormones, vaccines, etc. Today, the characterization, screening and manufacturing of protein hyd- lysates has become more sophisticated, with the introduction of reliable analytical instrumentation, high throughput screening techniques coupled with statistical design approaches, novelenzymes and efficient downstream processing equipment. This has enabled the introduction of custom-built products for specialized appli- tions in diverse fields of fermentation and biotechnology, such as the following. 1. Protein hydrolysates are used as much more than a simple nitrogen source. For example, the productivities of several therapeutic drugs made by animal cells and recombinant microorganisms have been markedly increased by use of p- tein hydrolysates. This is extremely important when capacities are limited. 2. Protein hydrolysates are employed in the manufacturing of vaccines by ferm- tation processes and also used as vaccine stabilizers.