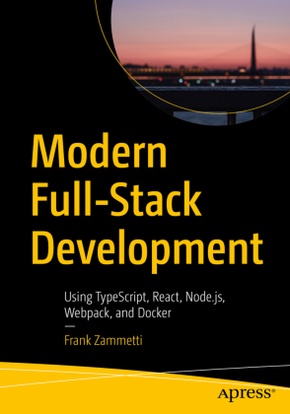 Explore what React, Node, TypeScript, Webpack, and Docker have to offer individually, and how they all fit together in modern app development.
React is one of the most popular web development tools available today, and Node.js is extremely popular for server-side development.  The fact that both utilize JavaScript is a big selling point, but as developers use the language more, they begin to recognize the shortcomings, and that\'s where TypeScript comes in and why it\'s gaining in popularity quickly.  Add Webpack and Docker to the mix, and you\'ve got a potent full development stack on which to build applications.
You\'ll begin by building a solid foundation of knowledge and quickly expand it by constructing two different real-world apps.  These aren\'t just simple, contrived examples but real apps that you can choose to install on your servers and use for real.  By the end, you will have a solid grasp of building apps with React, Node.js, and TypeScript and a good grasp on howWebpack can be used to optimize and organize your code for deployment. You\'ll also understand how Docker can be used to run the apps you build in a clear and well-defined way, all of which will be able to springboard you into creating more advanced apps on your own.What You\'ll LearnGet a project started and logically structure it
Construct a user interface with React and Material-UI Use WebSockets for real-time communication between client and server
Build a REST API with Node and Express as another approach to client-server communicationPackage the app with Webpack for optimized deliveryTake a completed app and wrap it up with Docker for easy distributionReview a host of other ancillary topics including NPM, Semantic versioning, Babel, NoSQL, and moreWho This Book Is For
Web developers with basic knowledge of HTML, JavaScript, CSS, and CLI tools who are interested in and in all aspects of application development, and using TypeScript instead of straight JavaScript.

8. Delivering the Goods: MailBag, the Server

9. Delivering the Goods: MailBag, the Client

10. Time for Fun: BattleJong, the Server

11. Tying It Up in a Bow with Webpack

12. Bringing the Dev Ship into Harbor With Docker