Combat Trauma and the Ancient Greeks 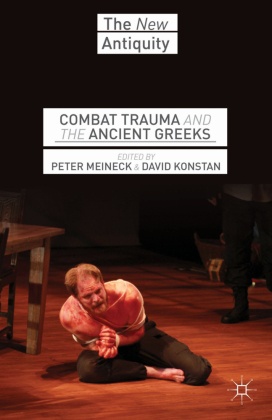 This ground-breaking book applies trauma studies to the drama and literature of the ancient Greeks. Diverse essays explore how the Greeks responded to war and if what we now term "combat trauma,""post-traumatic stress," or "combat stress injury" can be discerned in ancient Greek culture.

Introduction: Combat Trauma: The Missing Diagnosis in Ancient Greece?; David Konstan 1. War and the City: The Brutality of War and Its Impact on the Community; Kurt A. Raaflaub 2. Phaeacian Therapy in Homer's Odyssey; William H. Race 3. Women After War: Weaving Nostos in Homeric Epic and in the Twenty-First Century; Corinne Pache 4. "Ravished Minds" in the Ancient World; Lawrence A. Tritle 5. Beyond the Universal Soldier: Combat Trauma in Classical Antiquity; Jason Crowley 6. Socrates in Combat: Trauma and Resilience in Plato's Political Theory; S. Sara Monoson 7. The Memory of Greek Battle: Material Culture as Narratives of Combat; Juan Sebastian De Vivo 8. Women and War in Tragedy; Nancy Sorkin Rabinowitz 9. "He gave me his hand but took my bow": Trust and Trustworthiness in the Philoctetes and Our Wars; Nancy Sherman 10. Combat Trauma in Athenian Comedy: The Dog That Didn't Bark; Alan H. Sommerstein 11. The Battered Shield: Survivor Guilt and Family Trauma in Menander's Aspis;Sharon L. James 12. When War Is Performed, What Do Soldiers and Veterans Want to Hear and See and Why?; Thomas G. Palaima 13. Performing Memory: In the Mind and on the Public Stage; Paul Woodruff

"The volume is immune to the thematic disunity often recurrent in edited volumes and at the same time it offers a collection of different viewpoints on (mainly literary and philosophical) ancient texts. ... the book offers stimulating food for thought on the moral and psychological impact of war to classicists and ancient historians as well as interested readers." (Irene Salvo, sehepunkte, sehepunkte.de, Vol. 17 (11), 2017)

"The result is a generally useful set of discussions that demonstrates the benefits of asking new questions of old evidence while considering various traumas resulting from the conflict in ancient Greece. ... Taken as a whole, this is a valuable volume not just for those interested in the traumas of war suffered by soldiers and non-combatants, but also for readers considering the ways in which societies find copying mechanisms for dealing with traumas , societal and personal." (Lee L. Brice, Classical Journal, August, 2016)

"[These essays] shed considerable light on the suffering of individuals in ancient Greek societies at war. Someone genuinely interested in the effects of America's recent military engagements in Southwest Asia on individual soldiers and their families will find that this book offers a unique perspective which may lead to a more compassionate understanding of those effects." - Eternal Soldier

"The greatest strength of this engaging book is that it does not simply transfer the modern concept of combat trauma wholesale to the ancient world, but truly grapples with the question of whether such a transfer is indeed justified...For scholars and students of Classics, this book provides first-rate snapshots of the current state of ancient Greek trauma studies and shows the way for further research in this exciting new field." - Bryn Mawr Classical Review