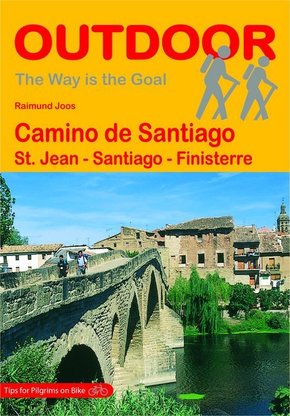 The main route of the Camino de Santiago, Camino Francés leads pilgrims over the Pyrenees. The WAY (Camino de Santiago) winds through the vineyards of Rioja into the lonely stretches of Castile, and the green hills and valleys of Galicia for some 800 km, before reaching Santiago de Compostela and its impressive Cathedral. The versatility of the landscapes, the cultural treasures of the cities along the Way, and the encounters with people from all over the world, make this hike an unforgettable experience. The author Raimund Joos, who walks this and other Ways of St. James for several months each year, describes the Camino Francés in 140 concise stages, which can be individually arranged to daily stages. Also, interesting detours and the continuing way from Santiago to Finisterre are introduced. For the current published edition, which was published in English for the first time, the descriptions were completely updated and new, improved maps, scaled 1:200.000, were painted. At every stage, overnight stays in refuges are naturally listed, so the pilgrim can easily find a place after a hard day. Information about sights along the Way and important general hints on topics such as "arrival and departure", "equipment", and "language", complete the description of the Way.

About the Translators, Editors and Author, Preface of the Autor and Translation Team, Introduction, Travel Information from A to Z, The Way of St. James Through Navarre, The Camino Francés through Rioja, Castile/León, Galicia, The Way to Finisterre.